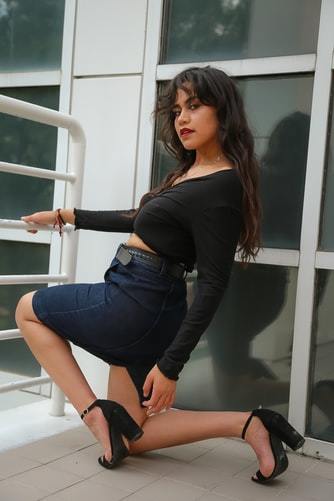 Many years ago, I arrived to the Colombian city of Barranquilla on another trip after having visited family again.

Before arriving, I had been talking to some Colombian chicks on the messaging app Whatsapp that I already knew.

Except for one – a chick named Maleja that I matched with on Tinder while I was in Detroit.

Now Maleja was a chick originally from Pereira but she moved to Barranquilla for some work.

If I remember right, she had some professional career in business. I don’t remember the exact position but she definitely had more money than the average Colombian.

So a bit of a career woman I guess you can say.

She was a tiny bit older too than I was at the time – maybe 5 or 6 years older.

Physically, she was a light brown skin chick with black hair.

Cute face too and a pretty great ass.

Well, before I got back to Barranquilla, it was pretty clear that we were going to hookup.

She was open about it despite not having met me yet in person.

To the point we were already sharing nude pics and having conversations more intimate than “what do you do for a living?”

So I arrived back to Barranquilla and went straight to my apartment that I was already living at.

The next day after my arrival, we planned to meet up.

Now she lived on the other side of the city than where I was at.

So we ended up meeting at Buenavista Mall.

Which is a very nice mall in Barranquilla – one of the better and safer ones.

So we met there and I had some difficulty finding her.

One tip by the way for anyone looking to meet hot Colombian chicks in Colombia….

First, having the dates start at a mall is pretty useful a good deal of the time. There are plenty of them in most Colombian cities and they tend to make great meet up points. Then just take the date elsewhere when you find her.

Second, be very specific as to where in the mall you two are going to meet.

This may seem obvious but was a mistake I often made in my earlier years living in Colombia a long time ago.

So in this case, I had told her that we should meet up near the entrance to the mall.

But there are several openings to the mall and I went to the entrance I normally go to.

And she wasn’t there…

And I forgot to bring my phone with me…

So I had the thought – “duh! Maybe she is at another entrance!”

So I ended up walking around the mall to other entrances looking for her.

And eventually found her sitting down with her phone.

Apparently she had been texting me but wasn’t upset about having to wait.

Most Colombian women are pretty chill about lateness – since they are often late themselves anyway.

Like she was – apparently she had showed up about 15 minutes late anyway.

But there she was – in a black shirt with tight blue pants. Some nice makeup.

And things were pretty well established in what we were going to do.

So I took her hand and led her back to my place – which was pretty close to Buenavista mall at the time.

And once inside, we didn’t take our time.

Very quickly we started making out and taking our clothes off.

And instantly she dropped to her knees and began to show me why Colombian women have a reputation for being high quality women.

But the fun didn’t stop there.

I picked her up and bent her over.

Now that was all said and done…

Not really anything special.

But the story didn’t end there….

After we were done, she asked me a usual question Colombian chicks ask…

Which is if I could pay for her taxi back to her place.

I don’t usually mind paying a few bucks for a taxi on a chick after we have already fucked.

And in Barranquilla, the cost of a taxi back then was about a few bucks more or less.

And in typical Barranquilla fashion, half of them try to rip us off when they see me – the gringo with the funny accent – behind her.

Because in my experience people usually try to rip you off more in Barranquilla than in other areas of Colombia.

And when they see a gringo, you can see dollar signs in their eyes.

On top of that, there were not too many taxis coming by at the time.

Even though you can usually spot one coming since it was close to Buenavista mall anyway.

Well, before an actual taxi comes by…

She was standing in front of me and was texting somebody on Whatsapp.

Which is typical in Latin America – latinos calling their partner “mi amor” on whatsapp.

It only means “my love.”

Now I didn’t know she had a husband or boyfriend but I was not surprised given the amount of infidelity in Colombia.

And she tells me she needs to take a call and I need to be quiet.

It was a quick call and she was basically saying to the guy that she is coming home and that the store she went to didn’t have the type of shoes she was looking for.

What a shame! No shoes!

And she ended the call saying she loves him and that was it.

Now keep in mind this isn’t the only time I have seen a Latina I have fucked tell a dude that she “loves him” on the phone.

In fact, I might have mentioned it in another article somewhere on here but I’d have to look for it amongst all the articles I have.

But I think I have written about another chick I fucked that also had to take a phone call after we fucked and say “I love you” to someone else.

Regardless of if I wrote that story yet or not, it is just another example…

Among various examples I have of finding out the girl I was fucking has a boyfriend or husband.

Truth is, Maleja is just one of many.

And I don’t go out of my way looking for them.

Because ultimately, if you end up fucking enough women in your life…

Be it Colombian, American, Argentine, Russian, Chinese, whatever type of nationality they are..

You will end up fucking another dude’s girl.

I can almost guarantee it.

It is a sad reality but infidelity is so common in the world.

And a lot of the time these chicks are not even open about having a boyfriend or husband with you.

She goes back home to tell her husband about not finding the right shoes.

He might find salty taste strange but think not much more about it.

And it would be even more unfortunate for him if I had came inside her.

Or if someone else does.

Which, if we are being honest…

If she is willing to take raw dick from me, then she probably is from other dudes.

Or maybe he is cheating on her also…

It works both ways in this country.

At any rate, there’s just a few lessons you need to take here.

First, not all Colombian women are these super traditional women you think they are.

There are plenty like that – much more so in some areas of the country than others.

And while Barranquilla is not the worst area of Colombia in terms of how unfaithful the women are, it is not the best either.

Second, even in more traditional parts of Colombia, you still got chicks like Maleja. Never be naïve about the woman you are thinking of marrying. They all could cheat on you.

Third, focus on self improvement and women a lesser thing in your life.

Enjoy hooking up and maybe even find someone to marry if you want a family.

But never make women the source of your happiness.

Because you can’t control how faithful any chick can be to you.

But you can control other factors in your life that can make you happier independent of how much you hookup or if you have a wife.

And ultimately, those are the main lessons here.

Hope you found the story interesting.

And if you want to read another story with some lessons, check out Story 28 here.

Thanks for reading and take care.