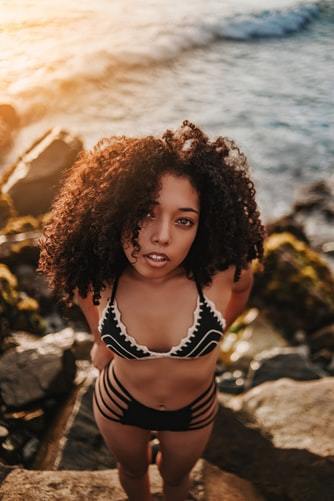 In 2008 and a little bit after, I was living in a Colombian city called Barranquilla.

Back then, I wanted to begin exploring other parts of Colombia that I had never been to.

Parts of Colombia that are not well written about.

As written about in this article I wrote here, that involved going to places like Monteria.

And in this case, I also traveled to another nearby city by bus called Sincelejo.

Sitting in a hot bus while sweating to death…

Surrounded by lots of people in a bus without much space also….

With the occasional person coming in and trying to sell snacks.

In a bus bouncing around and all around uncomfortable.

Was the trip worth it?

Well, upon arrival, I step off the bus and begin exploring different parts of the city.

Thankfully, I had a notebook where I wrote down some of the supposed highlights of the city from what I read online.

Upon walking around some plaza I stumble upon, I see this cute Colombian chick standing on the street selling some type of food.

Given it’s been over a decade, I don’t remember what it was. Maybe arepas?

But we got talking and eventually flirting even a little.

She blushed and said I spoke Spanish well.

Which, back then, I didn’t.

But given I was the only foreigner she saw in Sincelejo or in her life in general, she was amazed I traveled to her city.

Or her country for that matter

Or even learned Spanish to a conversational level.

And she became my guide in a way to Sincelejo.

And ultimately helped me have a fun night a few times.

Which was nice as I had just ended a relationship with a girlfriend of mine at the time.

And thankfully, this city has plenty of cute Colombian girls.

Plenty of them that are sweet, kind and nice.

And a great interest in foreign men as few of them show up here.

Yet alone speak Spanish and have the confidence to flirt in their language in public.

Are you ready to also show up here and enjoy the women and some of the minimal nightlife here?

Despite being the largest city and the capital of the Colombian department of Sucre, Sincelejo is an interesting city not commonly visited.

It happens to be located along the Caribbean Coast of Colombia relatively close to nearby large cities like Cartagena or Barranquilla.

And similar to those other cities nearby, Sincelejo has a very hot climate that will get you sweating within minutes of being outside sometimes.

One interesting thing about this city of nearly 280,000 people is that it is well known for its folklore and traditions.

One of those traditions is an event held in January called the Fiestas del Dulce Nombre de Jesus. This  translates to “the party of the sweet name of Jesus.” Essentially, the event involves bullfighting within a wooden bullring.

In short, this is an interesting little city in Colombia that is unique in its own way and worthy of a visit.

Not only because of some of the cultural offerings but also because of the beautiful women you can find here.

Which we will cover soon. 😉

This city seemed a bit shadier or sketchier than other Colombian cities I have been to. Because of that, I’m not sure I’d ever want to spend more than just a few months here.

By the time I was about to leave, I was pretty ready to do so. Fortunately, nothing ever happened to me but there were moments here and there where I felt a little bit unsafe.

So I wouldn’t recommend you come here in your first few months in Colombia. This place is more ideal for the man that has spent more time in Latin America more broadly or Colombia also. Get some travel experience down here more and make sure your Spanish is good. With experience and better Spanish, you will be more prepared for spending some time here.

It’s not very dangerous necessarily as nothing happened to me but it’s definitely not the safest place either and is better suited for someone more experienced.

Didn’t meet a single person that spoke English here. Not even at the hotel I stayed at where usually someone can speak it.

So if you are coming to Sincelejo, definitely improve your Spanish. This is a type of city that simply gets no real tourism from foreigners.

Therefore, learning Spanish is necessary for enjoying your time here and also will improve your efforts in meeting nice Colombian women here.

The general population of Sincelejo is a little bit more diverse than other Colombian cities like Neiva.

Here, you will find that around 76% of the population is white or mestizo (mixed background of white and indigenous).

And about 14% of the population is indigenous and 9% is black.

So for the most part, you will find plenty of different types of women here from white to brown to black. Depending on what you prefer, you can find it here.

In that sense, it tends to resemble in a way some of the neighboring cities on the Colombian Caribbean Coast in terms of its diversity and the type of women you will find in looks.

Women here are overall attractive. One of the major benefits to the women here is the diversity and the choices you have as man in the dating scene here.

Additionally, there doesn’t seem to be a lot of plastic surgery here. Met a chick who had done an operation on her breasts but that was it. At any rate, depending on if you like plastic surgery or more natural bodies, this could be a negative or positive.

But thankfully the women here do tend to have more naturally nice bodies with better curves and bigger breasts and butts in general.

On top of that, you will find more women here that show off a little more skin. Though they seem to be a little more conservative in dress code when compared to nearby large cities like Cartagena.

In general, the women here seemed a little more conservative than places like Cartagena because the city is much smaller. But on the other hand, the larger Caribbean culture has its influence here, which in my experience, tends to promote more hooking up and infidelity.

But the influence of that isn’t as strong here as what you would see in a place like Cartagena. So infidelity isn’t terrible here but it’s not perfect either.

Not as good here

For those interested to know, the venues in this list that I liked the most were Beer Station and Zouk.

For those who want to meet cute Colombian women in Sincelejo, it’s a good idea to try and meet women in public. Plenty of cute women outside that you can approach. Try checking out these areas if you are interested:

Out of all of these areas, the ones that seem to be the best here are Parque Santander, Parque Comercial Guacarí and Viva Centro Comercial.

When using Tinder, I didn’t meet too many chicks or get too many matches in this small Colombian city. For some reason, it seemed like not many were using it here despite there being various profiles.

Maybe more of them here had inactive profiles?

Either way, I tried my luck with Colombian Cupid – another site for dating Colombian women. I did get a few dates with that while here so you should try it also.

Check it out here to meet Colombian women in Sincelejo or anywhere in Colombia. Free to join.

Unfortunately, there are not too many good restaurants here in my experience.

You might just be better off cooking at home if you spend enough time here.

But there’s a few places worth mentioning.

And if you want steak, I’d recommend first Llanera La Union. It’s not the best steak but it’s some of the better steak you will find in this city.

But when speaking of meat and decent food, the best place you will find in Sincelejo is Llanera la 31. Definitely check out this place.

And if you want BBQ food, go to Restaurante Bar Arcanos.

Now if you want Italian food, go for La Barletta.

One cool thing also about food in Sincelejo is that there is a decent Peruvian place called Siracha. I never actually went to this place since I don’t like ceviche but I heard it had good Peruvian food.

Among all of these places, the ones I enjoyed the most were Llanera la 31, Restaurante Bar Arcanos and Tumbarrancho Arepa Venezolana.

There was only one hotel I visited in this area. It was Hotel Panorama. It costed about 55 bucks more or less per day.

Not perfect though. I found the service here to be a bit slow to getting checked in and the air conditioning didn’t work perfectly.

But aside from that, it’s definitely a good value for the price. Nice room, a good pool, a decent view of the city and decent food available here also.

So if you want a cheap and decent option for staying in this city at some hotel, this place does the job decent enough.

Overall, this is a nice little Colombian city.

In all honesty, it’s quite boring to spend any long time here. If I had to spend more than 2 months at a time here, I’d be very bored in a city that is not very aesthetically pleasing.

There simply isn’t much to offer people here but that might be appealing to some.

If you enjoy more the bigger city life like I do, then a place like Bogota obviously is better.

But if you want a smaller city off the tourist trail, this place will be good for you. Just depends on your tastes.

And if you want a better chance at finding a nice Colombian woman to settle down with that can be faithful, traditional and conservative, then Sincelejo can offer you what you want.

Plus, if you have any insight or questions of your own, let me know in the comment section or send me an email.

Thank you for reading and for your time.