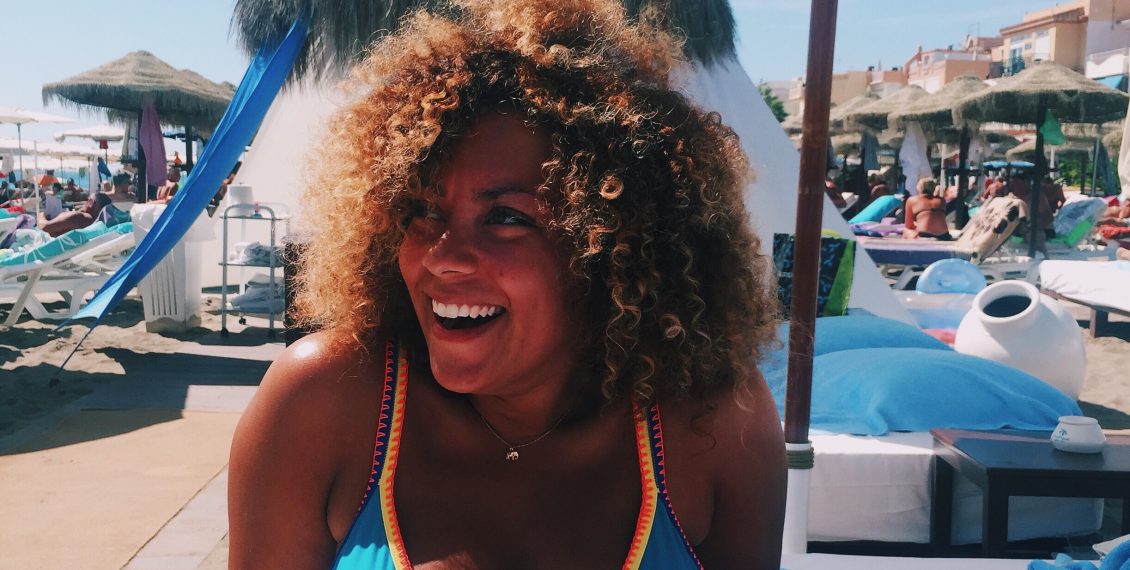 Some years ago, I traveled from Cartagena to a place known as Rosario Islands with a chick that I met while dating Colombian girls in Cartagena

Another beautiful Colombiana with light brown skin, black hair and a curvy body

Enough to keep me up at night

With the sun shining down on us, I wondered why I didn’t show up to this paradise earlier

Just near the coast of Cartagena, this is one of the many sights to see when visiting Cartagena

What more could a man want?

A nice beach with crystal blue water, some nice drinks and food and a sexy girl by your side with plenty of time to be dating Colombian girls in Cartagena

Cartagena has plenty of more touristic sights to offer outside of the Rosario Islands as it is also a UNESCO World Heritage Site.

Located on the Caribbean Coast of Colombia, Cartagena is also located near plenty of great beaches to visit.

In addition, Cartagena has plenty of colonial sites to visit including the Castillo de San Felipe de Barajas and the Old City.

Of course, these are just some of the touristy highlights of the city as Cartagena has plenty to offer.

Fortunately for you, Cartagena has an international airport, making it easier to arrive to the city to enjoy all of these sites.

Upon arrival, you will also notice that the city is quite hot as it is located on the Caribbean Coast. However, if you arrive from the months of May to June or October to November, you may also notice a lot of rain as these months include the rainy season for Cartagena.

Cartagena has about a million people living in it and is one of the bigger cities in Colombia.

As a result of being a bigger city, there are of course some neighborhoods to avoid and some that are safe to visit.

If you are planning on visiting most of the touristy sites in Cartagena, it is unlikely you will come across any of the worse neighborhoods as those tend to be safer with more police.

Regardless of where you are in the city though, I would say that you are likely to be safe overall. There are a lot more police in this city compared to some other Colombian cities, so you are a lot less likely to be a target of any violent crime.

Cartagena is not close to being one of the most dangerous cities in the country and most of the crime you may encounter will be pick pocketing.

Therefore, just keep an extra eye on your belongings and you are likely to be very safe.

In general, I always advise that you learn some Spanish as it will always expand the girls that you can approach and possibly have something casual or serious with.

Having said that, Cartagena has a greater amount of English speaking chicks when compared to most cities in Colombia

Therefore, learn Spanish to improve your chances here but keep in mind that you can have fun without it here also in my opinion.

And if you want to improve your Spanish, try using this useful textbook or this phrasebook to help you get started. If you still have trouble with Spanish after that, having a translator for your dates with Colombian women can also be helpful

Overall, you will find the population in Cartagena to have a big mix between White, Indigenous and Black with a lot more women here who look white or black.

Compared to the rest of Colombia, women in Cartagena tend to have darker skin. The only other city that is comparable to Cartagena in this regard is Cali.

The women in Cartagena are generally very attractive. They usually have great bodies with darker skin when compared to the rest of the country.

Furthermore, I noticed that there was a little bit more plastic surgery here than compared to other cities. I suspect that the reason I noticed more women with obvious plastic surgery in public was because there is more prostitution here than in most other Colombian cities.

However, there were plenty of normal chicks I encountered who had plastic surgery also, so it’s not just the prostitutes outside in public who are getting plastic surgery.

Not as much as the plastic surgery in Medellin but still enough that it should be mentioned.

Moreover, the women here seem a bit more comfortable to show their skin and dress lightly when compared to Colombian women from other cities like Bogota or Bucaramanga.

Also, the women here tend to be a bit friendlier and open to chatting with someone new when compared to other cities.

Having said that, you also won’t have as much of a “foreign value” when compared to nearby cities like Barranquilla due to the higher degree of tourism in the city of Cartagena.

Despite that, I’d say that the women in Cartagena are still relatively easy to get laid with and won’t be too difficult.

Overall, I wouldn’t say the women in Cartagena are the most attractive women in Colombia, you won’t be disappointed by the nightlife and the quality of women here.

As mentioned before, there is plenty of prostitution in Cartagena.

For that reason, some of the nightclubs and bars you will find here have a heavy amount of prostitutes looking for clients and not enough normal chicks who are down for something casual.

However, you can avoid a lot of these prostitutes by going to bars or nightclubs that have less tourists

As many of these prostitutes look for tourists with more money.

In addition, I would say that nightlife in Cartagena (and most of Colombia) is not ideal for picking up women as most people tend to go out in groups and are less receptive to meeting new people.

Regardless, there are plenty of good places to visit with friends or another chick you are bringing along, such as:

1.      Mr. Babilla: By far one of the best clubs in Cartagena. Decent prices with good choice of music. A bit more expensive and upper-class though so be ready to spend some money here.

2.      Salsa Quiebra Canto: Good place for taking a chick if you want to go dancing.

3.      Café Havana: Good place for dancing salsa music and is open until late.

4.      Bazurto Social Club: Outside of the Walled City, this place is good for Thursday to Saturday and has a good atmosphere.

5.      The Beer Lovers: Great place due to its decent selection of local brews and craft beers.

6.      La Casa de la Cerveza: This place is a bit more expensive but also has plenty of good beer choices and is a bit more relaxed when compared to some of the previously mentioned places.

7.      Donde Fidel: Plenty of tourists in this place and has a good selection of salsa music.

8.      Tu Candela: Great place due to its wide selection of music from reggaeton to merengue and more. Choose this place if you want a wide variety of Latin music and decent drinks.

9.      La Movida: A fairly expensive place in Cartagena but has good drinks and should dress more nicely here.

10.  Alquimico Bar: This place is decent with its own restaurant and rooftop. Has plenty of rum also and a decent atmosphere. Plenty of tourists as well. Prices are a little more expensive when compared to other places but reasonable also.

Similar to other cities in Colombia, you should always check out the malls in the area as they usually make the best places for finding normal and good looking girls.

Another benefit to going to some of the malls in Cartagena is that there are a lot less tourists there.

For that reason, you’ll have a little more value in those places as a foreigner than approaching women at a bar, nightclub or talking to them on Tinder.

Some of the malls that I tried that were decent were Bocagrande Square Mall, Mall Plaza El Castillo and Caribe Plaza Centro Comercial.

Outside of the malls, it’s also not a bad idea to go to the historic center in Cartagena. During the day there are plenty of decent looking chicks in that part of that city that are open to being approached.

The only downside to online game in Cartagena is that there are more prostitutes using Tinder to find potential clients. For that reason, Cartagena isn’t the best place for Tinder in Colombia due to the lesser amount of normal girls but it’s still not bad either.

It’s not as good as finding chicks during the day but definitely better than looking for normal chicks at night in my opinion.

And outside of Tinder, make sure to check out Colombian Cupid as it has plenty of decent women on there ready to meet a nice man.

Or if you are interested in meeting a potential wife to settle down with, try out the online resources offered by Dream Connections

For steak, I’d recommend Pepe Anca as my favorite place to have gone for steak in Cartagena. The food is great and the service is pretty good overall.

Also, Restaurante Dino’s Steakhouse is decent too with great steak. When compared to Pepe Anca, the customer service is not as good but it’s not bad either. For me, it’s a close second.

Finally, there are a few extra restaurants that I believe deserve mention. First, Malagana Café & Bar is a great choice with reasonable prices and a decent view from the rooftop.

Also, La Cocina de Cartagena is a great choice for Caribbean food in general and the prices are relatively cheap compared to other places.

As said before in other city guides, I always recommend you spend a little more when it comes to hotels here.

One of the main reasons being is that there are plenty of bad hotels out there that don’t offer much and it is always better to spend a little bit more if you can afford it.

And in Colombia with the current exchange as good as it is, it will be easier for you to afford a good hotel these days

So where should you stay if you want to begin dating Colombian girls in Cartagena?

Well, in my experience, I’ve come across some good and bad hotels in Cartagena in my time in Colombia.

In general, you shouldn’t have to spend too much more than 100 bucks to find a good hotel and there are some cheaper options for around 50 bucks.

As your experience will better if your hotel is closer to the places you want to visit.

Overall, Cartagena is a city that has a lot more to offer than just the women as you can tell by the photos used in TripAdvisor

With the amazing beaches and historical sites to visit, there is a lot of reason to visit this city.

In addition to that, the women are of course very beautiful here and receptive to foreigners

Though it may not be the best city in Colombia in regards to the women, it’s far from being the worst.

If you would like to visit a city in Colombia that has more to offer than just the woman, Cartagena is a great choice overall with plenty to offer.

Of course, who wouldn’t want to spend a nice sunny day near crystal blue waters with some sexy Colombian women at the Rosario Islands?

Finally, if you are interested in dating Colombian women in other cities, check out my other guides

Good luck and thanks for reading!